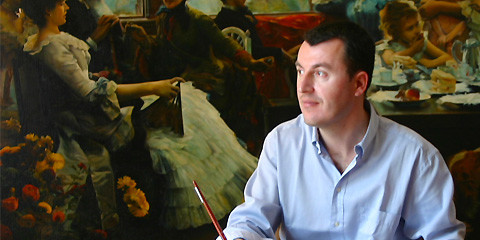 To comprehend the artistic life of Licio Passon you can’t neglect his belonging to his homeland of the Friuli region and his truest and most profound values of a rustic life that he has made his own and not revisited as a faded memory.

The people who have formed him have been his parents who well knew the hardship of the fields. The same fields that to the eyes of a little boy, born in the second half of the ‘60s, appeared as a treasure chest where there were hidden fruit, berries, flowers and little animals; a real world to discover and to understand in every little detail, but also to fix on a drawing sheet to limti its fugacity.

Since then Passon has never left his paintbrushes and colours to follow his artistic calling though not neglecting his technical studies. He hasn’t abandoned painting even during a working period which has also contributed to develop his ability of observation and an extraordinary meticulousness, destined thanks to the following knowledge of expressive means to let his talent emerge. All this has confirmed Passon as an artist and he has been recognized even Overseas as “pictor optimus” for the skillfulness that his kind of work requires in adherence to reality, which to be represented needs the exercise of some indispensable skills among which there are persistance, will of learning, love for application and study, complete dedication.

The knowledge of the great artists of the past, the will to risk in order to copy their work, the participation to great international events linked to art, the growing success, even abroad, of collectionists and art galleries have all made Passon in the last years to completely dedicate himself to painting in his studio, where an abundant collection of works were born whose elaboration requests attention, ability and taste for colour. The predilection of the artist for all that is connected with what is calm, harmonious, Beauty results in a choice that is really nonconformist, to the extent of being provocatory for wanting to realise what for many people is indispensable: painting a reality that is more convincing than the real one and for that nonetheless captivating from the original.

The scandal of beauty

I do not want to convince myself that obscurity has, at any moment, put an end to art.
It is not credible that entire generations have been occupied only to create enigmas.

“What does it mean to be a classic? It means being good for an eternity,” so Giorgio Soavi said some time ago speaking of the unforgettable Gianfranco Ferroni.

An itinerary of success, even if not yet grabbed by eternity, has in its route, the young, self-taught painter Licio Passon. Even though he is of a classic beginning, that does not mean he has let himself hang onto the past. Incite is brought, expressed with a brilliant and extroverted figurative language that transmits universality with its shining emotions.

Free, and unconsciously lucky from the conditionings of the Academies that too often, instead of immersing potential artists in the grandiose story of art – same story of man – enriched in knowledge, not only subtract from their competency, but pretend to direct them by whipping out the same contemporary model each time to try and understand art today. The “politically correct” applied to art! Passon, who comes from an austere Fruilian family, was first compelled to study the technique of art, only later allowed himself to engage in the impulse of creativity that liberated him to follow his dreams in painting.

In his unusually tidy study, a method pertaining mostly to Austrian influenced art, welcomes one with a feeling of well-being: the pictures offer themselves to the visitor with a delight of the senses that eventually becomes joy of the soul. A work of precocious and unusual balance, “The Tea of Five”, both unanimous and complex in nature, occupies an entire wall (cm.180 x 230) in its welcome: the cordial atmosphere of a sumptuous tea room crowded with elegant characters between porcelain and silver teapots, stands as a principle work that unites various types of works: exquisite portraits, explosive bundles of flowers, still lives of inescapable seduction, and coming from below, a Nordic light filtered from a large stained-glass window beyond that it is outlined by a fairy-tale like garden : countless pictures within pictures.

From patient and thoughtful brush strokes is born the lonely art of Still Life, already very appreciated and presented in galleries of prestige. In these mature compositions, time is stopped with a lateral shot of light, humid insides of a demolished pumpkin spring out liberated and shameless, anachronisms of dust on old piles of destroyed clothing, repetitious splintering on the same angle of a drawer, succulent offerings of lemon slices, cracks on exhausted pitchers, an unutterably laborious knitting of jute into which had been thrust an iron tool that is now missing, lines of leaves in back lighting squander fading gray horizons of silence. These delicate drawings give one a glimpse at intimate thoughts of the soul. With astonishing backgrounds rich in color, they create an optic vibration for the viewer, increasing the beauty of the atmosphere in this manner.

But it is his Venice collections that provoke a tangle of amazing passions. With pungent realism, fleeting perspectives of facades, and candid profiles of Austrian stone, all in one movement, Passon tells us the surprise of chance marvels: overwhelming colors, multicolored arabesques, the disorder of dangling threads, crooked antennas, scarecrows of clothing in the wind, macrocosms of chimneys wavering, corrupt and crumbling stones, foundations wrapped with thick algae like a soaked fleece from panting wild beasts of the sea: these are already sufficient representations to compute its value. I am instead marveled by reflections of the piazzas captured in the liquid channels, extended in an unbroken and exhausted lament of architecture, that drags us further another overwhelming story.

Splendid moments, stolen by the perception of a miraculous temporary gleam of light, are maybe nourished here in a perverse glamour of decline, in which the sun plays with impudent flashes and shadows in the imperceptible wavering of water, almost deceiving us that the offenses of time, in a strange alchemy, can be cured in an upside-down dream of magical mirrors. Painted so that they rip through the wall, they take one through open passages on the Venetian streets, masses of green water that bursts beards of algae to lick the walls, rosy brightness of marbles and lace, mosaics of gold, and lighted angles of Austrian stone, all in a movement of vivacious coloring.

To the unsuspecting mind arrives the stench of the channels that is blended with the aphrodisiac wafted through solvents in the paint of the painter. On a black sandal sitting next to two wobbling balls in the coming shade of a packed canal with dissolved facades, a red and white striped drape sits abandoned. A rectangle of sky hurls from the roofs and is extended on velvet water. The clear arc of a bridge is now coming to an end in its gloomy oval of shade. The enchanting fluid rises for high tide. And a melancholy song that puts one to sleep, now regretfully awakens us from this Venice of robbed beauties, a splendid metaphor of the life that lazily kills us.