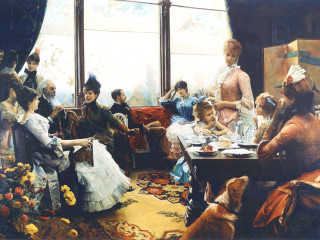 Preserving the noble dignity , the measure and outspoken similarity of classical portrait painting of the contemporary icons of Licio Passon, in their total adherence to the subject being represented, they return intact the illusion of a presence in which the external features and psychological elements appear united, coming from an interiority at times mixed between the research for formal perfection and idealisation governed by a troubled contingency.

Escaping from pre-made schemes for his paintings, Passon accurately chooses the setting which, each time evoke the world and the peculiarity of the subject being represented, in the portrait with a celebrative and praise-worthy character, retelling the story of want has been obtained by a self made man, with a touch of irony, the artist renders the whole up to date anti-rhetorical leaving the task of rebuilding an existence to narrating background .

When they are not taken between reassuring and refined domestic walls, his mostly female subjects, pose in a naturalist surrounding, with a grace worthy of a Petrarca’s dream.